David Medansky wishes you to be healthy. Order your copy of Break the Chain of Dieting today!

In this episode, we will know more about Eric’s deep why on creating his amazing films.

“I decided then that this was my calling. I would make films chronicling recovery from trauma beginning with a documentary about the fire that had wiped the slate clean for me”

Christiansen is an acclaimed documentarian who has built his brand around socially responsible filmmaking that educates, inspires and heals. Christiansen, a seven-time Southwestern Region Emmy Award recipient, explores the impact of trauma, the resilience of the human spirit, and how a powerful platform for hope can be built to help trauma survivors begin the vigilant journey of healing. A trauma survivor himself, Christiansen worked through the loss of his home and possessions in the Painted Cave Fire by creating his first film Faces in the Fire 25 years ago.

All of his films (Faces in the Fire, Homecoming: A Vietnam Vets Journey, Searching for Home: Coming Back from War) have been transformative in the recovery process for thousands of people whose lives have been compromised mentally, spiritually and physically by trauma. Leveraged as educational tools by top mental health institutions, Christiansen's films migrate from the entertainment arena into environments that help additional audiences navigate the profound collateral damage trauma creates not only on the individual but the family and community as well.

"Searching for Home" is strikingly photographed by Mr. Christiansen and is sure to give comfort and support to countless veterans and their families.” the New York Times said prophetically of Eric's most recent work, "Searching for Home: Coming Back from War", a critical, audience and social success.

Eric directed, photographed and edited this film that brought the message of truth, healing and hope to millions. The film was first released theatrically then went on to public television with over 2300 airings in less than three years.

Anita Gates of the New York Times called Eric Christiansen’s documentary "Homecoming: A Vietnam Vets Journey, “a surpassingly worthy…touching film.” Eric’s other independent documentary, about grief recovery following a natural disaster, “Faces in the Fire” garnered critical acclaim including an Emmy Award for Outstanding Achievement Documentary. The film is still being used today by the National Institute of Mental Health for training counselors and comforting survivors.

Throughout his career, Christiansen has also created content for major networks including Discovery, TLC, PBS, MTV and an Imax film.

Discover more about the power to move!

SUPPORT ME ON PATREON!

CONNECT WITH ME ON SOCIAL MEDIA 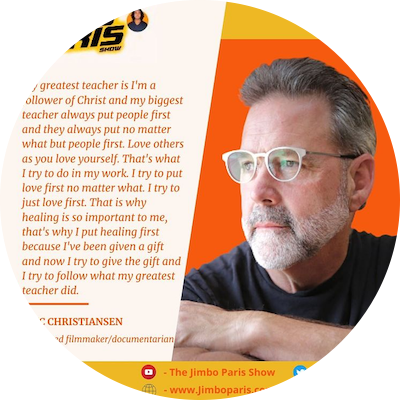